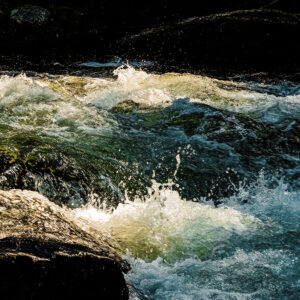 I am increasingly alarmed about the climate emergency. I find it difficult to watch others engage in behaviours which we know contribute to the problems: for example, unnecessary single-use plastics, and idling vehicles. People say: “What I do doesn’t make a difference.” or “What’s the point, we are too far gone.” I find that troubling. I care about what is happening for future generations.
I was becoming bolder; in particular asking people who were idling in their cars to turn them off. In one instance a school bus driver was sitting with the bus going, windows down. It was beside a park where groups of day camp children were playing. None were on their way to this bus, which was waiting for them. When I brought it to the driver’s attention and asked if he himself had children. He replied “Yes, I just wasn’t thinking. Thank you.” He turned the motor off. Emboldened by such responses, I found myself speaking to others.
Recently, slowing my bike to turn at the top of my street, a youngish black woman sits in an idling SUV with her windows open. I nicely ask if she might turn off the ignition to reduce pollution.
“We all need to be aware of contributing to pollution and climate change.” I add. “Isn’t it just lovely that your white privilege affords you the opportunity to worry about climate change. You have no idea! I don’t even know if my 17-year-old son will make it home tonight or be shot by police”, she replies.
She continues in anger to describe the whole back community as “still slaves of you white people, many struggling just to put food on the table. These are our issues. You have no idea from your place of luxury and privilege.”
I am quiet, stunned and silenced. She continues for what feels like 15 minutes. I listen to the far-ranging comments about how black slaves still exist as “they” continue to do “our” dirty-work. In spite of her anger, I hear her pain and truth. A couple of times I am moved to tears: compassion for her and all people who have suffered at the hands of white Europeans; shame at my superior sounding attitude towards the needs of mother earth.
I need to keep going. She shows no sign of letting up. I ask her name, which she tells me. “That’s a beautiful name,” I say, “I need to go now.”
I ride away humbled, challenged. Her rage palpable, valid. I wonder what lies just under the surface of our “civilized society”. The increase in the verbiage and actions of white supremacists among us is alarming.
Significantly, this was the first time I have felt first-hand what it feels like to be dismissed; the recipient of another’s rage, maybe hated, just because of my skin colour. That alone marks me as privileged. It is because I am a white woman. Earlier in my life when struggling with being a woman in a male dominated patriarchal world, I thought possibly my experience was like that of a black person. I know that this is not the case. I am privileged because I am white. I live in a society that remains systematically racist.
Climate justice, racial justice, and economic justice. Maybe we can’t have one on this planet without the others.

This site uses Akismet to reduce spam. Learn how your comment data is processed.