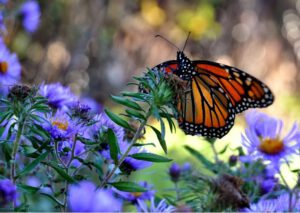 I was thirty years old. My then husband and I were in a couple’s therapy weekend. The leader asked for a volunteer couple to do a communications exercise in the group. The task was to stand apart and move to where we felt comfortable enough to name an issue in the relationship. My husband stood at one end of the room, I at the other. As we moved closer, attempting to speak, something stirred in me and I began to cry; tears turned to sobs. The group silently witnessed my pain. Engulfed in their support, my inner landscape turned from one of deep hurt and pain to inexplicable joy – a feeling of being deeply loved and accepted at the core of my being. Even though I had been taught all my life that God loved me, this was the first time that I felt it, no, KNEW IT, in the depths of my being.

The central story of our faith which we celebrate at the time of year when mother earth is bursting with new life, is about death and re-birth. I notice, both in our celebration and life experience we are quick to move through, even gloss over, the hard parts of the story in the same way we wish to avoid winter. In the garden, Jesus is “sorrowful unto death”. From an expression of sadness, he moves to anger at the disciples who are unable to witness his pain. Turning to the one he calls “Father”, he bargains, but then must surrender – “not my will but yours.” How often we must come to this place when we have done all we can to change or reverse a difficult situation, and simply accept what is – the things we cannot change, such as illness, death and many others.

On the cross Jesus cries: “My God, why have you forsaken me?” He knows that deep place of desolation, of feeling completely abandoned. I expect most of us have been at there at some point. This is also the place where people of faith might walk away – “There is no God,” they say – “What kind of God would allow this?”
The next part of the story we avoid – not only does Jesus die, but the story tells us he ‘descends into’ hell, where he spends three days. Whether you understand this metaphorically or literally, the meaning is the same – Hell is hell! Three days symbolizes a long time in a very lonely place. 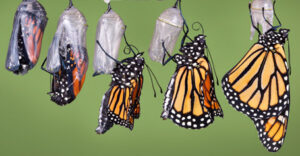 Like the caterpillar who must remain in the chrysalis until the appointed time, it is only by staying long enough that we come to what Jan Hatanaka calls an “epiphany of despair”1, and through that, to new life; hence the butterfly as symbol of Easter and resurrection. Barbara Brown Taylor writes: “It is the inability to bear dark emotions that causes many of our most significant problems, and not the emotions themselves.” She continues “I learned that sadness does not sink a person; it is the energy a person spends trying to avoid sadness that does that.”2 “Each time we trust the dying, we are led to a deeper level.”3

That moment a little over forty years ago planted the seeds of what became a career change from nursing to ministry. It was the first of many personal death and resurrection experiences. These have been pivotal in my life, and I regret none of them, even though at the time I would have wished, like Jesus, for “the cup” to be taken from me.

The invitation is this: the next time you find yourself in this cycle of death and re- birth, and it happens with any significant loss or change in our life, take the time you need to honour all parts of the process long enough for the epiphany of wisdom to emerge. 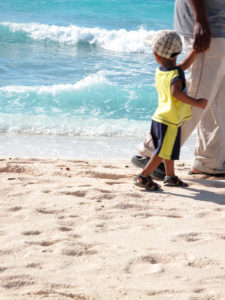 But Mary treasured all these words
and pondered them in her heart.
Luke 2:19

My almost four-year-old granddaughter tells me she is afraid of loud noises.
“Which ones,” I ask.
“Thunder” she responds.  I reassure her, probably foolishly, that in winter we have snow storms but not thunder.

Last spring an old tree across from their house came down, bringing with it two large concrete hydro poles, with part of the tree landing on the neighbour’s car.  The power lines lay across their property rather than keeping the lights on inside.  Her mother had just come up the front walk.

In the night during at least two of the loud thunder and lightning storms last summer, I lay awake in tears.  Not because I don’t like loud noises.  I was afraid for my grandchildren, and yours, or your future grandchildren, and theirs. What kind of environment are we are leaving them?  Individually and collectively we do not seem to have the will to do the hard things necessary to ensure the comfortable survival of humans on the planet.  I do what I can; ride my bike, limit unnecessary purchases, recycle.  But I also love to travel and I know that air travel is a big polluter.

Mary “pondered” these things “in her heart.”  She probably did not want to say “yes” to the request to birth “the Christ”.  What does it mean for me, for you, to birth the Holy in our time and place?  Can Mary’s “yes” be my “yes?”  That is the invitation at the heart of the ancient story.

I’m listening to the hopeful energy of our young people – the numerous “Christ” children already born into what I pray will be a world able to support their lives.  And I’m going to start buying carbon offsets for my flying habit.

It is Wednesday morning. I leave Sunday for my scheduled annual retreat in Connecticut. As I prepare breakfast, the top news story is Trump’s clamp-down on “illegals”; the separation of parents and children, migrants entering the United States, all being held in detention. I’m appalled: angry, at the latest bombastic bombardment from this bully, especially as it arrives on the heels of the 2018 G7 meeting, where he labelled Prime Minister Trudeau “weak and dishonest” – a slight projection, perhaps! Like many other Canadians I’m increasingly uncomfortable with the notion of a visit to the United States.

With a morning free of commitments, I start looking on-line for retreat centres in Ontario, and the rest of Canada. Calls and e-mails go to at least 6 requesting space for a silent retreat the next week. I e-mail my friend and former theological professor – an American, living in Canada for the past 35 years – asking where she goes in northern Ontario. Responses come in over the early afternoon hours. The retreat houses are full. My former professor and R. C. sister friend calls me. She is in Arizona leading a retreat for other sisters, several of whom are helping to care for the children who have been removed from their parents under this Trump initiative. She asks: “Can you hold the tension between these two ends of the spectrum?”

I decide I need my retreat more than I need to protest Trump. I am met at the airport by another retreatant.
“How are you?” she asks
“I almost didn’t come. The news has been so hard.”
“Yes, for us too. We are embarrassed, ashamed.”

Our conversation continues. I hear just how hard it is to deal with Trump supporters who only listen to distorted news feeds which say things like – it is actors rather than students protesting gun violence in schools. A chasm exists in this divided country. I hear about the “resistance” that stared immediately, and the work being done to encourage people to vote in the mid-terms. I feel kinship, humbled by the possibility that Ontario is heading into a similar future with its new conservative government.

I’ve been carrying much grief over climate change and justice. The trumpfords either deny, or don’t seem to care, about the world that we are leaving for our grandchildren and the generations to come. Don’t they see that all the money in the “taxpayer’s pocket”, or political power in the world (in the short term, as that is the apparent limit of consciousness of this subset of politicians) mean nothing if you can’t drink the water, breath the air, or grow nutritious food?

The first evening of the retreat I sit in a circle with six American women.
“I almost didn’t come.” I say, as I introduce myself. There is a heaviness in the room. One shares her grief at the political situation and one by one around the circle the anger and despair is acknowledged and felt. They too are suffering.

The week is spent mostly in silence. The beauty and fullness of mother nature surrounds me: The steady pulse of the ocean, the magnificent trees and flowers, the birds, bees, rabbits, groundhogs, dragonflies and other creatures draw me into silence within and without.

It is the final afternoon. I sit in the same circle of seven. “I’m glad I came,” I say, “It is good to be here and remember nothing is black and white.” I feel solidarity with their struggle and am humbled by their honesty. I leave them, and you, with the message of hope and video that came to me on my retreat:

The humble bumble bee
Will bring humanity to
its knees.

We will only survive
If we realize
Our survival depends
Upon it!

How badly will we be
Stung, before
we wake up?

The mighty shall be brought low.
It has always been thus.